John Southward (1840-1902), writer on typography, born on 28 April 1840, was son of Liverpool printer, Jackson Southward. After education at the Liverpool Collegiate Institution, he gained a thorough practical knowledge of printing in his father's office, Pitt Street Liverpool. At seventeen he became co-editor with the Rev. A. S. Hume of the Livepool Philosophical Magazine, and from November 1857 till its discontinuance in 1865 he conducted the Liverpool Observer, the first penny weekly issued in the town, which was printed in Jackson Southward’s office. On the failure of the paper John Southward came to London to increase his typographical knowledge, and was reader successively for Cox & Wyman (until 1868) and for Eyre & Spottiswoode. 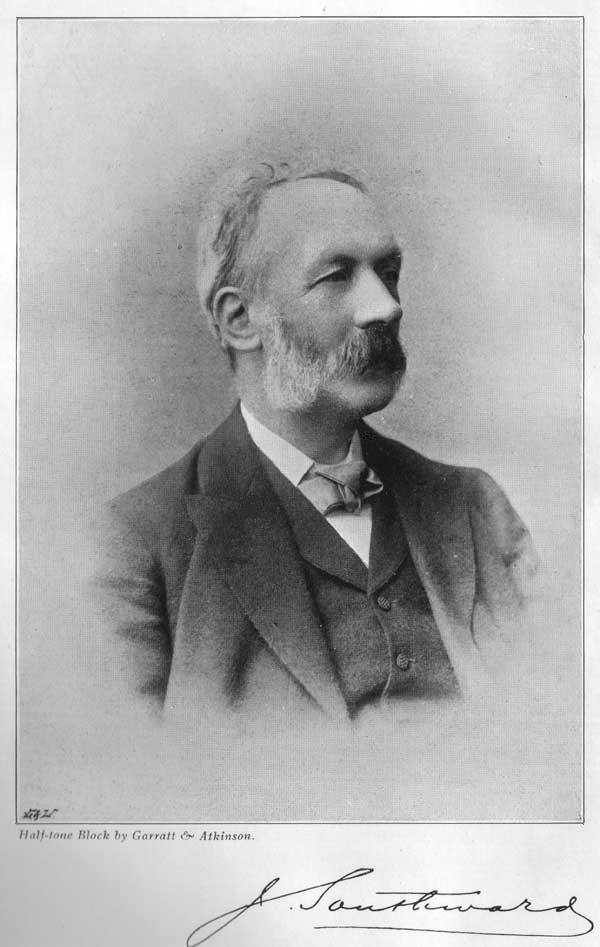 In 1868 Southward travelled in Spain for a firm of English watchmakers, traversing all parts of the country, visiting every newspaper office, and securing copies of all serial publications. He embodied his experiences in four articles in the Printers’ Register in 1869. Many further contributions followed, and from February 1886 till June 1890 he edited the paper. He also contributed to other trade organs, and in 1891 took over from Mr Andrew Tuer the Paper and Printing Trades Journal. This he relinquished in 1893.

Southward soon became recognised as the leading authority on the history and process of printing. His Dictionary of Typography and its Accessory Arts after being issued as monthly supplements to the Printers’ Register, was published in book form in 1872. It was printed simultaneously in the Philadelphia Printer’s Circular, and formed the basis of Ringwalt’s American Encylcopaedia of Printing. A revised edition appeared in 1875.

Practical Printing: a Handbook of the Art of Typography, a much larger work, which also first appeared in the Printer’s Register, was first published independently in 1882, and became a standard text-book. Southward prepared revised editions in 1884 and 1887. The fourth and fifth editions (1892 and 1900) were edited by Mr. Arthur Powell. Southward's Progress in Printing and the Graphic Arts during the Victorian Era (illustrated) appeared in 1897. Modern Printing, which Southward edited in four profusely illustrated sections between 1898 and 1900, was designed to be at once a reference book for the printing-office and a manual of instruction for class and home reading. The work, in which leading experts cooperated, was adopted as a textbook in the chief technological institutions. Among Southwood's minor publications were: Authourship and Publication, a technical guide for authors (1881), and Artistic Printing (1882). He contributed the article Modern Typeography to the ninth edition of the Encyclopaedia Britannica, and also wrote technical articles for Chamber’s Encylopaedia. The Bibliography of Printing, issued under the names of Edward Clements Bigmore and C.W.H. Wyman (3 vols. 1880-6), was to large extent his work.

Southward was much interested in philanthropic work, and in 1888 founded and edited for a short time a monthly paper called Charity. During his later years he resided at Streatham, but died in St. Thomas's Hospital, Westminster, after an operation on 9 July 1902. He was buried in Norwood cemetery.

Southward was twice married. His first wife, Rachel Clayton of Huddersfield, by whom he had three sons and four daughters, died in 1892. His second wife, Alice, widow of J. King, whom he married in 1894, survived him. An engraved portrait is in Modern Printing. section 1.