I began printing books with the hope of producing some which would have a definite claim to beauty, while at the same time they should be easy to read and should not dazzle the eye, or trouble the intellect of the reader by eccentricity of form in the letters. I have always been a great admirer of the calligraphy of the Middle Ages, and of the earlier printing which took its place. As to the fifteenth century books, I had noticed that they were always beautiful by force of the mere typography, even without the added ornament, with which many of them are so lavishly supplied. And it was the essence of my undertak­ing to produce books which it would be a pleasure to look upon as pieces of printing and arrangement of type. Looking at my adventure from this point of view then, I found I had to con­sider chiefly the following things: the paper, the form of the type, the relative spacing of the letters, the words, and the lines, and lastly the position of the printed matter on the page. 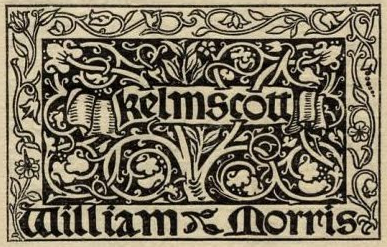 It was a matter of course that I should consider it necessary that the paper should be hand made, both for the sake of dur­ability and appearance. It would be a very false economy to stint in the quality of the paper as to price: so I had only to think about the kind of hand made paper. On this head I came to two conclusions: 1st, that the paper must be wholly of linen (most hand made papers are of cotton to day), and must be quite “hard,” i.e. thoroughly well sized; and 2nd, that though it must be “laid” and not “wove” (i.e. made on a mould made of obvious wires), the lines caused by the wires of the mould must not be too strong, so as to give a ribbed appear­ance. I found that on these points I was at one with the prac­tice of the papermakers of the fifteenth century; so I took as my model a Bolognese paper of about 1473 My friend Mr. Batchelor, of Little Chart, Kent, carried out, my views very satisfactorily, and produced from the first the excellent paper which I still use.

Next as to type. By instinct rather than by conscious thinking it over, I began by getting myself a fount of Roman type. And here what I wanted was letter pure in form; severe, without needless excrescences; solid, without the thickening and thinning of the line, which is the essential fault of the ordinary modern type, and which makes it difficult to read; and not compressed laterally, as all later type has grown to be owing to commercial exigencies. There was only one source from which to take examples of this perfected Roman type, to wit, the works of the great Venetian printers of the fifteenth century, of whom Nicholas Jenson produced the completest and most Roman characters from 1470 to 1476. This type I studied with much care, getting it photographed to a big scale, and drawing it over many times before I began designing my own letter; so that though I think I mastered the essence of it, I did not copy it servilely; in fact, my Roman type, especially in the lower case, tends rather more to the Gothic than does Jenson's.

After a while I felt that I must have a Gothic as well as a Roman fount; and herein the task I set myself was to redeem the Gothic character from the charge of unreadableness which is commonly brought against it. And I felt that this charge could not be reasonably brought against the types of the first two decades of printing: that Schoeffer at Mainz, Mentelin at Strasburg, and Gunther Zainer at Augsburg, avoided the spiky ends and undue compression which lay some of the later printers open to the above charge. Only the earlier printers (naturally following therein the practice of their predecessors the scribes) were very liberal of contractions, and used an ex­cess of “tied” letters, which, by the way, are very useful to the compositor. So I entirely eschewed contractions, except for the “&”, and had very few tied letters, in fact none but the absolutely necessary ones. Keeping my end steadily in view, I designed a black letter type which I think I may claim to be as readable as a Roman one, and to say the truth I prefer it to the Roman. This type is of the size called Great Primer (the Roman type is of “English” size); but later on I was driven by the necessities of the Chaucer (a double-columned book) to get a smaller Gothic type of Pica size.

The punches for all these types, I may mention, were cut for me with great intelligence and skill by Mr. E. P. Prince, and render my designs most satisfactorily.

Now as to the spacing: First, the “face” of the letter should be as nearly conterminous with the “body” as possible, so as to avoid undue whites between the letters. Next, the lateral spaces between the words should be (a) no more than is neces­sary to distinguish clearly the division into words, and (b) should be as nearly equal as possible. Modern printers, even the best, pay very little heed to these two essentials of seemly composition, and the inferior ones run riot in licentious spac­ing, thereby producing, inter alia, those ugly rivers of lines running about the page which are such a blemish to decent printing. Third, the whites between the lines should not be excessive; the modern practice of “leading” should be used as little as possible, and never without some definite reason, such as marking some special piece of printing. The only leading I have allowed myself is in some cases a “thin” lead between the lines of my Gothic pica type; in the Chaucer and the double columned books I have used a “hair” lead, and not even this in the 16mo books. Lastly, but by no means least, comes the position of the printed matter on the page. This should always leave the inner margin the narrowest, the top some­what wider, the outside (fore edge) wider still, and the bottom widest of all. This rule is never departed from in medieval books, written or printed. Modern printers systematically transgress against it; thus apparently contradicting the fact that the unit of a book is not one page, but a pair of pages. A friend, the librarian of one, of our most important private libraries, tells me that after careful testing he has come to the conclusion that the medieval rule was to make a difference of 20 per cent from margin to margin. Now these matters of spacing and position are of the greatest importance in the pro­duction of beautiful books; if they are properly considered they will make a book printed in quite ordinary type at least decent and pleasant to the eye. The disregard of them will spoil the effect of the best designed type. It was only natural that I, a decorator by profession, should attempt to ornament my books suitably; about this matter I will only say that I have always tried to keep in mind the necessity for making my decoration a part of the page of type. I may add that in designing the magnificent and inimitable woodcuts which have adorned several of my books, and will above all adorn the Chaucer which is now drawing near to completion, my friend Sir Edward Burne-Jones has never lost sight of this important point, so that his work will not only give us a series of most beautiful and imaginative pictures, but form the most harmonious decoration possible to the printed book.

Text written at the request of a London bookseller for an American client who was about to read a paper on the Kelmscott Press.